How Wrong I may have been

I read again a post on housing.  (I think I read it before.  I may have even posted it.  the main fact is that you can argue that we are facing a housing shortage.  I had though of the housing supply as excessive for a long-time due to the easy money of the early 2000’s.

But Karl Smith offers an alternative view.  The boom in housing was not that much.  Check out this graph: The point is that the growth in population her growth  in houses is at a rate of almost 5 people per house.  If that were to continue it would imply a doubling in household size, and that seems unlikely.

Another implication is that the idea of an excess construction of homes that collapsed as the cause of great recession doesn’t hold up well.  The idea that housing was hammered by tight money does hold up.  Check out this previous post.

Posted in 2008 to sometime recession, Jobs

It is more and more plausible that poor monetary policy really drove the economy off a cliff in 2008.  This to a large degree the same story as the cause of Great Depression in the early 1930’s (See:  A Monetary History of United States 1867-1930, Friedman and Schwartz)

The financial crash played a role in reducing the creation of money by lending against reserves (created by the fed), and increasing demand for money (reducing the velocity or spending for each dollar in people’s hands).

Now we have to rely on the fed to manage what still seems like variation in people’s willingness to hold dollars and the banks willingness to lend to avoid inflation or other mischief.   The fed needs a consistent, but sophisticated response to those things.

Krugman and Taylor keep “jabbing” at each other about investment and unemployment and the role of government. So I don´t mind showing again that the slump that began in mid 2008 (not end 2007) is a direct consequence of monetary policy mistakes. And not the so called “mistakes of 2002-04” that Taylor keeps harping on, but the big mistake, reminiscent of 1929 that the Fed made in 2008.

Krugman never tires of saying that the ZLB makes all the difference (and evokes the 1921 recession (here) to argue that “conservatives” are dead wrong to use it as an example of the benefits of government keeping its “distance”).

As usual I go about showing arguments through a set of pictures.

The first shows the already standard indicator that after mid 2008 the Fed allowed nominal spending, that had evolved along a stable growth path during the “Great Moderation”, to “fall off a cliff”, something that had last happened in 1938.

Why did this happen? As we´ll see, it wasn´t the housing bust and the financial crisis that ensued, but the fact that monetary policy tightened significantly (despite the low level of interest rates – 2% from April to October 2008). The following picture shows that up to mid 2008, money supply increased to offset the fall in velocity (rise in money demand). But after that point money supply growth and velocity fall together.

To me this is the most compelling explanation for the “debacle” that followed. As seen in the next picture, residential construction employment peaked in early 2006.

But total nonfarm employment kept rising only dropping after mid 2008.

The same pattern is seen in private investment. First, residential investment peaks at the end of 2005.

But nonresidential investment keeps chugging along up until, you guessed, mid 2008. 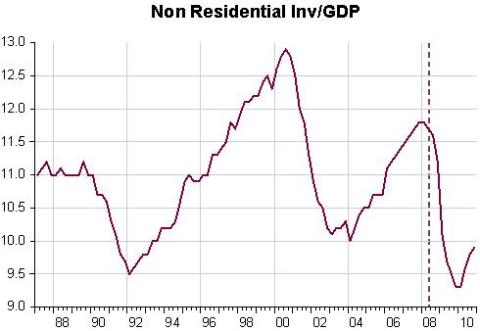 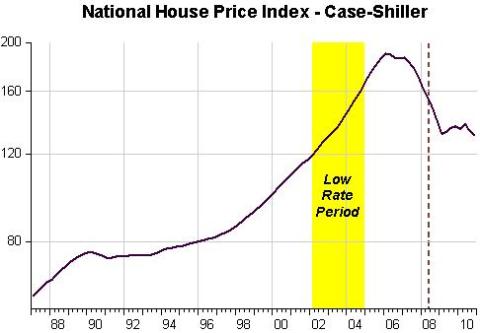 Prices peaked in early 2006. By mid 2008 prices had already dropped by 15%. But the economy was still standing! Also note that house prices began rising in mid 1997 (that´s an interesting story on its own) and just kept on going during the “low rate” period.

What was the government (at all levels) doing? The following pictures show government purchases (consumption and investment) and government expenditures on transfers and subsidies.

Both had increased somewhat (1 and 1.5 percentage points, respectively) between end 2006 and mid 2008. After that point government purchases increases another 1 percentage point while “automatic stabilizers” increase transfers and subsidies by almost 3 percentage points of GDP.

So what made the recession acquire the moniker “Great”? Monetary Policy mistakes!

I wonder what Milton Friedman would say if he were around. Maybe this will help find out:

Between 1980 and 2005, as the world embraced free market policies, living standards rose sharply, while life expectancy, educational attainment, and democracy improved and absolute poverty declined. Is this a coincidence? A collection of essays edited by Balcerowicz and Fischer argues that indeed reliance on free market forces is key to economic growth. A book by Stiglitz and others disagrees. I review and compare the two arguments.