You can tell a lot about the attitude of an article or magazine from the pictures chosen.

This is a hit piece apparenly given the photo of Ron Paul with his eyes hooded by shadows. 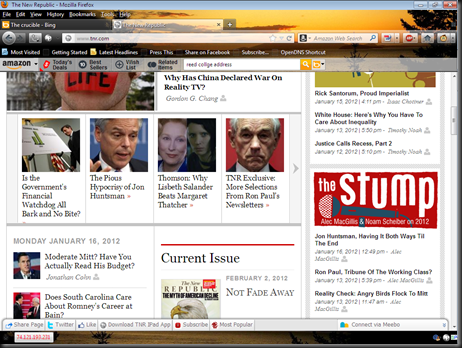 When fox on the right and The New Republic on the left are attacking:  they must think Paul is a threat.

I don’t agree with a lot he says but it does seem like he more and more consistently advocating unwillingness to use force.

Ron Paul vs. The Lamestream Media

A new blog I happened on to.

How Conservatives Drove Me Away

via Ron Paul vs. The Lamestream Media.

First, is  A Libertarian’s Lament: Why Ron Paul Is an Embarrassment to the Creed, by Will Wilkinson.  Good to read.

Despite the title, Wilkinson praise Paul and admits to having contributing to his 2008 campaign.  Wilkinson especially supports Paul on foreign policy.  I share this view.  One of my greatest frustration with the GOP is they apparently will never acknowledge how off track the War on Terror got from 2001-2008.  Perhaps Mitt Romney stating he’d like to double the number of people in Guantanamo was the most disturbing.  A President may have to do cruel thing on occasion, but to contemplate it with such gusto was shocking.

On domestic issues, Wilkinson is most critical of Mr. Paul, especially on civil rights laws, which Paul has stated are“a massive violation of the rights of private property and contract, which are the bedrocks of free society.”  The issue here is property rights are held to be so sacrosanct because they are by assumption morally acquired.  But is that always true?

Though Wilkinson supports property rights he is less willing to assume they  are all morally acquired.  He points out:

How much of Thomas Jefferson’s property was justly acquired?

These issues get complicated fast. Most of us think there’s a sort of statute of limitation on the sins of our fathers, and for good reason. But it’s absolutely undeniable that the distribution of property and power in America partly reflects hundreds of years of constant and systemic violation of precisely those rights Paul claims to prize. Anti-discrimination legislation indeed puts some limits on rights to property and free association. But in light of America’s cruel history of official social, legal, and economic inequality, it’s hard to see these limits as "arbitrary," even if we want to pretend, for the sake of social peace, that the distribution of property reflects a history of mostly just acquisition.

Wilkinson also argues that Paul sees property rights as an end in themselves to great an extent.  He states:

The important thing for libertarians to remember—and the thing that Ron Paul forgets, or, rather, never knew—is that a system of secure property rights is a means to a peaceful society of mutual benefit, not an end in itself.

I agree here, but I think thinking this means I’m not a libertarian, though I think Wilkinson thinks of himself as such.  Libertarians I think see liberty as they only good to maximize not as a means to a peaceful society of mutual benefit.  Am I wrong???

Paul is also criticized for his views on immigration.

The second piece I liked for its title mostly:

Obama’s Best Hope on the Jobs Crisis: Convincing Us He’s Not in Charge

While I think the President is accused of many things he’s not guilty of, more and more he does seem ineffective.  Does this headline and this make that point?