The Great Macroeconomic Experiment of 2013

In late 2011, the economist David Beckworth and the writer Ramesh Ponnuru wrote an editorial in the New Republic on how “both liberals and conservatives are wrong about how to fix the economy.” How were they wrong? Conservatives were wrong because, contrary to common belief on the right, the Federal Reserve wasn’t in fact doing enough to boost the economy. Liberals, however, were wrong in opposing austerity and calling for more fiscal stimulus in the form of stimulus spending or temporary tax cuts.
In Beckworth and Ponnuru’s view, the Federal Reserve still had plenty of room to boost the economy. Not only would fiscal tightening be good over the long haul, but it would force the Fed to act. And they argued that as long as the Fed is working to offset austerity, the country “won’t suffer from spending cuts.
We rarely get to see a major, nationwide economic experiment at work, but so far 2013 has been one of those experiments — specifically, an experiment to try and do exactly what Beckworth and Ponnuru proposed. If you look at macroeconomic policy since last fall, there have been two big moves. The Federal Reserve has committed to much bolder action in adopting the Evans Rule and QE3. At the same time, the country has entered a period of fiscal austerity. Was the Fed action enough to offset the contraction? It’s still very early, and economists will probably debate this for a generation, but, especially after the stagnating GDP report yesterday, it looks as though fiscal policy is the winner.

So how has this experiment unfolded since then? Has the Fed been able to offset the fiscal drag? Michael Darda, Chief Economist of MKM Partners, has the answer:

Despite a two-year contraction in nominal federal outlays for the first time in more than five decades and a raft of tax hikes starting in early 2013, job gains are running slightly ahead of the 2012 pace. Non-farm payrolls (+203K in November and 200K in October) have averaged 189K during the first 11 months of 2013, ahead of the 179K 11-month average in November 2012 and the 170K average for November 2011. Over the last 12 months, non-farm payrolls have averaged 191K, also above the 12-month averages for the last three years. Indeed, year-to-year gains for overall payrolls and private sector jobs have been very steady despite the most intense fiscal consolidation since the Korean War demobilization. Many observers late last year were of the mindset that the fiscal cliff and/or sequester would either throw the U.S. economy back into recession, or slow it materially. It has done neither because, in our view, the Fed has offset it. Although monetary policy has beenfar from perfect, allowing the financialsystem to crash in 2009 (instead of doing QE1), allowing low inflation to morph into deflation in 2010 (instead of initiating QE2) and allowing the full force of the sequester/tax hikes to hit in 2013 (rather than rolling out QE3) do not seem like particularly desirable outcomes. The Fed has managed much better than the ECB and that is the proper counterfactual.

Several points to note. First, the Fed has been offsetting since 2010 a tightening of the structural budget balance as a percent of potential GDP. In my opinion, that is an even more impressive feat. Second, its ability to do so demonstrates that monetary policy is still effective at the zero lower bound. Third, it is amazing that so many people were predicting a recession in 2013 because of the sequester. They did not take seriously the possibility QE3 could offset the fiscal drag. I am waiting for their mea culpa.

Bernanke – Assimilated by the Borg?

via Bernanke – Assimilated by the Borg?.

“My fellow Princetonian, Ben,”
Said Krugman, “A man of great ken,
Said to signal, in crisis,
Inflation of prices,
Would get people spending again.”

“But his Fed, in my own objectivity,
Has shown unexpected passivity
To use every tool
That he spoke of in school
To boost economic activity.”

“To fight unemployment so brutal,
One should use the whole kit and caboodle,
But the Fed, in its thrall,
Assimilates all,
Against which, resistance is futile.”

In a scathing critique entitled “Earth to Ben Bernanke”, New York Times columnist and Princeton professor Paul Krugman took the Fed chairman to task for seemingly forsaking the advice that he gave to Japan’s central bankers twelve years ago. Then-Professor Bernanke lectured the Japanese on their “Self-Induced Paralysis”; were they to face the “liquidity trap” of a stagnating economy and zero interest rates with sufficient boldness, wrote Bernanke, the Bank of Japan would signal a higher inflation target of, say, 4%. This would likely induce folks to take their yen out of their futons and spend them. A similar lesson would apply to today’s Fed, says Krugman, but Chairman Bernanke has not followed the advice of Professor Bernanke. Has Bernanke been cowed by anti-inflation political bullying, he asks, or “assimilated by the Fed Borg and turned into a conventional central banker?”

Prices are Lower with less Inflation, but so are wages

As I promised to do here, I am posting a sequel to my original column: Ron Paul’s Money Illusion. I want to thank everyone who took the time to comment and criticize the views expressed there because it has led to me to sharpen my thinking on the matter. I doubt that what I have to say here will sway opinion one way or the other, but I at least hope that the nature of my criticism will be more 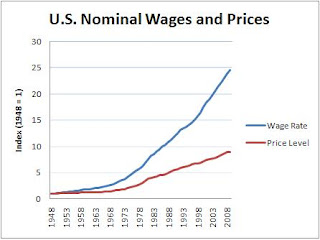 According to this (publicly available) data, the price-level (CPI) has increased by about a factor of 10 since 1948. But the average nominal wage rate has increased by a factor of 25. (There is, of course, considerable disparity in wage rates across members of the population. But I am aware of no study that attributes significant wage or income heterogeneity to monetary policy. Of course, if readers know of any such studies, I would be grateful to have them sent to me.)

The figure above implies that the real wage (the nominal wage divided by the price-level) has increased by a factor of 2.5 since 1948. This is undoubtedly a good thing because it implies that labor (the factor we are all endowed with) can produce/purchase more goods and services. More output means an increase in our material living standards (Though again, I emphasize that this additional output is not shared equally. But surely a laissez-faire world advocated by some is not one that would generate income equality either.)

Now, an interesting question to ask is how the picture above might have been altered if the price-level had instead remained more or less constant. Judging by the emails I receive, many people evidently believe that the nominal wage path depicted above would have largely remained the same (that is, they apparently seen no connection between nominal wages and the price-level).

If this was indeed true, then the average real wage in America would have increased by a factor of 25, instead of 2.5 under a regime of price-level stability. And if you believe this, or something close to it, then the conclusion would indeed be startling: the inflation generated by the Fed has apparently served only to reduce the purchasing power of labor (diverting resources to powerful capitalists). This claim–or some variation of it–is implicit in the quoted passage above.

I suggested, in my original post, that there is reason to believe that under an hypothetical regime of price-level stability, the nominal wage rate in the graph above would instead have ended up increasing only by a factor of 2.5 (more or less)–the factor by which real wages actually rose. This is what I meant by my claim of long-run neutrality of the price-level increase; and it is also what I meant by Ron Paul’s Money Illusion (which is subtly different than claiming the superneutrality of money expansion; more on this later).

Some evidence in favor of my "long-run neutrality view" is to be found in the time-path of labor’s share of income (GDP): 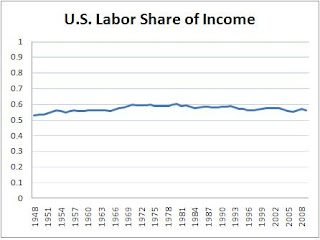 Why is the gold standard crazy? – Megan McArdle – Business – The Atlantic

Why is the gold standard crazy? – Megan McArdle – Business – The Atlantic.

via Hooters, Sarah Palin, and the smart money.