One of the best writers on the web at boiling down macroeconomics for a general audience is Noah Smith who provide the post below.  Even so I’ll try to boil this down more.

He comments on John Taylor’s WSJ article arguing that fiscal austerity would aid the economy.  The assumptions that this relies on are:

1. taxes have big supply side effects.  Reductions in transfers and reduced taxes will increase the incentive produce and actual production.

2. The demand side impact will be offset by the expansionary policy by the Federal Reserve.

3. The Fed will be able to do step to because interest rates are not at some minimum bound.

Noah I think considers 3 to be problematic and that makes 2 problematic.  In the end it all relies on strong incentive effects of tax cuts, so in short the Taylor article is really a simulation with a close lineage to 80’s supply side economics.

John Taylor, possibly more than any other economist who writes in the press, likes to simplify things for public consumption. Personally I think this is kind of a shame, since A) any WSJ reader who understands economic models will not understand what Taylor is talking about until they actually go read his research, and B) any WSJ reader who doesn’t understand economic models probably already believes that “austerity = good”, and doesn’t really care if there’s a DSGE model backing up the assertion.

Fortunately, your friendly neighborhood Noah is here to read and explain where Taylor is getting his arguments.

This week the House of Representatives will vote on its Budget Committee plan, which would bring federal finances into balance by 2023. The plan would do so by gradually slowing the growth in federal spending without raising taxes.

Still, the plan has been denounced by naysayers who assert that it would harm the economic recovery and that, at the least, any spending reductions should be put off until later. This thinking is just as wrong now as it was in the 1970s…

According to our research, the spending restraint and balanced-budget parts of the House Budget Committee plan would boost the economy immediately. With the Budget Committee’s proposed tax reform included, the immediate impact would be even larger…

A modern macroeconomic model! Watch out, kid, you could put someone’s eye out with that!

(Random note before we get started: The “1970s” reference is pure conservative herp-derpery. People weren’t trying to fight stagflation with fiscal policy in the 70s; deficits were quite low. “The 70s” is just a word that conservative writers throw into their pieces so that conservative old men who read the article will nod their snowy heads in sage agreement and mumble “Yes, the 70s. Carter. Stagflation. Mmm-hmm!”)

OK, but I digress. Why does Taylor think austerity will produce growth? The article doesn’t tell us a lot about the aforementioned “modern macroeconomic model,” so let’s go to the source. Here it is.

Taylor’s paper basically uses a Smets-Wouters type DSGE model, i.e. the most popular and successful DSGE model in existence at the moment. It’s a New Keynesian model, which means that demand shocks exist and have an effect, through sticky prices, and hence monetary policy matters. So it’s not a “freshwater” or RBC-type model (though Taylor et al. do also show that their results hold with an RBC model, somewhat unsurprisingly).

In other words, Taylor’s model is not the type of model that many (including myself) have criticized for being too easily biased toward conservative policy conclusions. Instead, it is a very mainstream type of model, of the kind usually used to justify the Fed’s role in managing aggregate demand. Of course, Taylor uses it for something quite different.

So anyway, I’m not going to copy the equations from the paper, because that would just bore you, and you can just read it yourself. However, I’ll try to summarize. The upshot of the paper, as Taylor said in his WSJ piece, is that a certain kind of austerity plan would be good for the economy in both the long-run and the short-run.

Here are the basic things you should know about where Taylor gets his results:

The “Treasury View” is the simplistic and wrong idea that any dollar spent on “stimulus” has to be one dollar not spent by the private sector, and hence government spending is incapable of raising output. Taylor is not espousing this view. In fact, as we’ll see, in Taylor’s model changes in government spending most definitely can affect output.

2. This is NOT the “Confidence Fairy.”

3. The economic boost of austerity comes entirely from tax cuts.

Taylor’s model has distortionary taxation in it, and the distortions are large. Hence, spending cuts mean lower taxes and hence less distortion, both now and in the future. In other words, the GDP boost in Taylor’s model doesn’t come from reducing the deficit, it comes from cutting taxes. The government’s long-run budget constraint, along with forward-looking expectations (the same force that powers “Ricardian Equivalence” in other models), means that spending today –> taxes tomorrow –> distortions tomorrow –> distortions today because of forward-looking expectations.

4. The “Sumner Critique” is in this model.

Normally, New Keynesian models of this type focus on finding the optimal monetary policy. But since Taylor is looking at fiscal policy, he assumes that monetary policy is set according to an unchanging rule.  OK, I’ll put in ONE equation. Here’s the rule:

This is a backward-looking Taylor rule with interest rate smoothing. Unfortunately, in this working paper I can’t find what values Taylor uses for the coefficients on output and inflation. But he does put in some coefficients, that’s for sure.

Remember, this is a New Keynesian model with sticky prices, so aggregate demand does matter. But Taylor assumes that the Fed is already doing pretty much everything a New Keynesian would have the Fed do.  So in Taylor’s model, the Fed cancels out most aggregate demand shocks, including positive demand shocks from stimulus. So it’s hardly surprising that Taylor is not going to see government spending doing much good for the economy; he’s assumed that 1) the Fed is perfectly capable of managing aggregate demand, and 2) the Fed will tighten to partially counteract stimulus. This is just a softer version of the common “Sumner Critique” of fiscal policy, though of course Taylor probably didn’t get it from Sumner.

5. There is no Zero Lower Bound.

Note that in the monetary policy rule written above, there is nothing that says that interest rates can’t go negative. In other words, Taylor assumes what most New Keynesian models assume, which is that there is no Zero Lower Bound (or that we’re always far from it). Any of you who are familiar with the New Keynesian DSGE literature will recognize that Taylor’s result is a very common result in this literature: Away from the ZLB, fiscal policy is not very effective. The “New Old Keynesians” such as Paul Krugman and Gauti Eggertsson, who advocate fiscal stimulus, explicitly make reference to the ZLB as the reason stimulus works. Taylor just ignores that idea in this paper.

6. In Taylor’s model, if you cut government purchases, it throws the economy into a recession.

Taylor’s suggested austerity plan makes big spending cuts, but the cuts are almost entirely cuts in transfers (like entitlement payments or welfare) rather than in government purchases (like infrastructure spending). Here’s a picture of Taylor’s austerity plan: 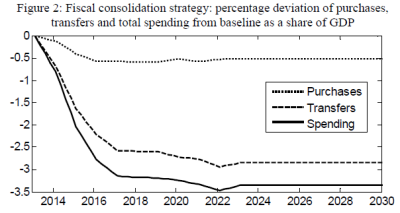 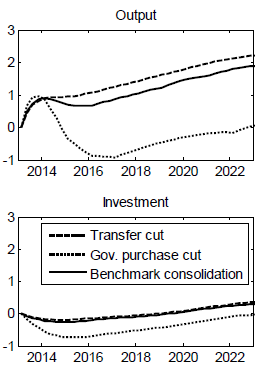 Wow! In Taylor’s model, implementing austerity by cutting government purchases would throw the economy into a deep recession. The reason he gets short-run benefits from spending cuts has everything to do with the fact that it’s almost all transfers being cut.

6. In sum, Taylor’s result is a standard New Keynesian result.

Upshot: If you have no Zero Lower Bound, and if the Fed partially counteracts the demand-side effects of fiscal policy, and if people have forward-looking expectations, and if you don’t cut government purchases much, and if taxes are very distortionary, then austerity works. This is not really a new result, but it rarely gets shown so explicitly, so it’s good that John Taylor and his co-authors went ahead and did it.

That said, the result basically ignores the real Keynesian critique that has emerged since 2008, which is that the Zero Lower Bound matters a lot. It also probably assumes that taxes are a bit more distortionary than they really are. And it also probably overestimates the Republicans’ real willingness to cut transfers (entitlements are the “third rail”, after all), and underestimates their willingness to cut government purchases. In real life, spending cuts usually fall on the things that are politically most easy to cut, but are economically most valuable in both the short and long runs – infrastructure and research. Finally, Taylor’s plan ignores distributional concerns, but that’s pretty much par for the course.

So John Taylor is not committing some major fallacy. He’s just using a standard mainstream New Keynesian DSGE model to stump for the Republicans.
Update: Miles Kimball says that Taylor’s result is basically all about the monetary policy reaction function (i.e. the equation I posted above). Furthermore, Kimball notes that Taylor has supported a tighter monetary policy, in direct opposition to the kind of Fed reaction function he assumes in the paper. In other words, if Taylor got the monetary policy he wants, then his own DSGE model would go *poof* and suddenly austerity of the transfer-cutting type would become much more harmful.
Update 2: A commenter points out that in Taylor’s simulations, real interest rates never fall below zero. That means there’s something odd about the parametrization, since real short rates are negative right now. But I don’t know where the oddness comes from.