The spring sag we’ve since at least 2010 seems to have arrived.  I’m surprised I don’t see more discussion of this.

The “Population” is the Civilian Noninstitutional Population, or the number of people 16 and over who are “not inmates of institutions (for example, penal and mental facilities and homes for the aged) and who are not on active duty in the Armed Forces”.  This is increasing every month, and increased 167 thousand in March.
The Civilian Labor Force is based on the percentage of people who say they are either employed or unemployed.  This yields the participation rate (the percentage of the civilian noninstitutional population that is in the labor force).  The participation rate has declined recently due to both demographic reasons and the weak recovery from the financial crisis.  Separating out the two reasons is difficult, see: Understanding the Decline in the Participation Rate and Further Discussion on Labor Force Participation Rate and Labor Force Participation Rate Update.

Click on graph for larger image.
Since the participation rate declined recently due to cyclical (recession) and demographic (aging population) reasons, an important graph is the employment-population ratio for the key working age group: 25 to 54 years old.
In the earlier period the employment-population ratio for this group was trending up as women joined the labor force. The ratio has been mostly moving sideways since the early ’90s, with ups and downs related to the business cycle.

This graph shows the job losses from the start of the employment recession, in percentage terms – this time aligned at maximum job losses. 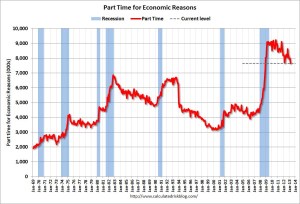 From the BLS report:

The number of persons employed part time for economic reasons (sometimes referred to as involuntary part-time workers) fell by 350,000 over the month to 7.6 million. These individuals were working part time because their hours had been cut back or because they were unable to find a full-time job.

The number of part time workers decline in March to 7.64 million from 7.99 million in February. This is the few part time for economic reasons since November 2008.
These workers are included in the alternate measure of labor underutilization (U-6) that declined to 13.8% in March. This is the lowest level for U-6 since December 2008.
Unemployed over 26 Weeks

This graph shows the number of workers unemployed for 27 weeks or more.
According to the BLS, there are 4.61 million workers who have been unemployed for more than 26 weeks and still want a job. This was down from 4.8 million in February. This is trending down, but is still very high.  This is the fewest long term unemployed since June 2009.  Long term unemployment remains one of the key labor problems in the US.
State and Local Government

This entry was posted in 2008 to sometime recession. Bookmark the permalink.