Does Third World Use of Newer Technology than US show the US is behind the Third World? 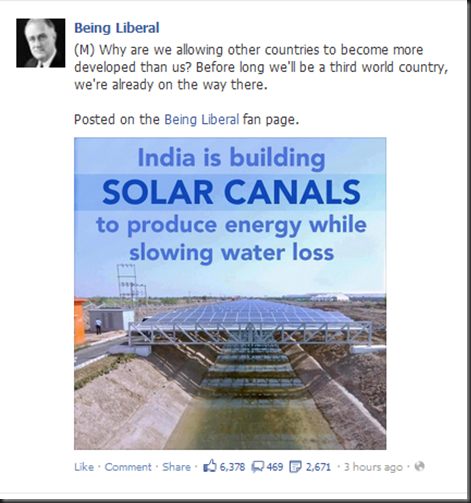 I found this on my facebook newsfeed.  It got me thinking.

The solar canal idea is really pretty intriguing.  There’s more information on it here.  Generate energy, but don’t take up any land, and conserve water.  Seems like a win-win for India.  the question is: does the last assertion follow that it shows the US (or other nations that don’t do this!) are on their last legs as first world powers, because they aren’t doing this?

I’m not convinced because I think the economics of solar would be much better in India where this is being done.  It makes sense they do it first.  With improving solar panels in time we may see it in the US too, but with the recent drop in gas prices, I think it’s a ways off.

First, the amount of solar energy varies from one part of the world to another.  I couldn’t confirm this, but I think that India would have more kWh per square foot from solar than would the US or most nations in the temperate zone rather than the tropics like India is.  I did manage to learn a little about the variation within the US

Based on this I’ll contend subject to correction that further south mean more sunshine based on poor solar generation in Alaska relative to the lower 48.  Less rainfall or an arid climate also helps.  The solar canals are being built in western India as shown below:

So not only is the are tropical it’s arid to semi-arid.  The point being there are lots of sunny days and likely a lot of kWh per square foot of installed solar.  Also as an arid region water is scarce and expensive as well.  Both of these things make this a good idea for this area, but not necessarily everywhere.

In researching this I found at least one other nation in the low latitudes installing solar energy for much the same reason, lots of sun and few clouds.

In addition, Indian labor costs are much lower than in the US. 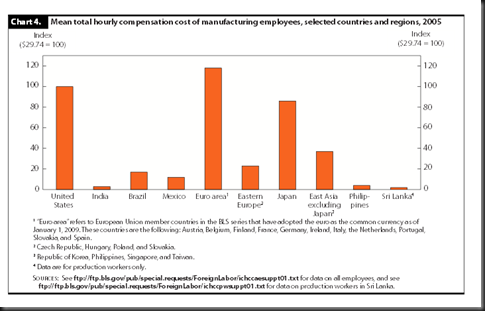 Solar generating equipment is likely about the same cost to purchase in India as elsewhere, but the installation cost has got to be much lower.  Construction labor is largely not tradable, so the difference in installation costs from the US to India is likely even more than about 10 to 1 as shown in the chart.  This is a good illustration of the Penn effect.  This a good idea for this area, but not necessarily everywhere.

IN TIME THIS MAY MAKE SENSE IN THE US AND EUROPE, BUT IT MAKES PERFECT SENSE IT HAPPENS IN THE TROPICS FIRST

Solar technology has improved dramatically, and if it continues to do so the cost of solar power could easily fall by half.  Solar canals or highways may come to be in US and Europe because of that.

The maximum efficiency of solar cells is about 20-40% currently.  The theoretical limit is of course 100%.  Is it reasonable to suppose we can come much close to that limit and increase the power output of cells and similarly reduce the cost per generation?  History would suggest maybe so.

My point is that even if solar canals are less cost-effective in the US than in India, and in fact not cost-effective relative to conventional generation in US, that may not always be so, especially because the technology is improving.  But it makes perfect sense that India is doing this first, and in no ways shows the US has become a third world nation.  QED.

This entry was posted in Energy. Bookmark the permalink.