I have blogged earlier about the concerns posed by widening inequality across the world. Conventional wisdom on widening inequality has attributed it to the explosive growth in incomes at the top of the distribution. It is argued that there has been a sharp increase in returns to scale for higher education, manifested in the spectacular incomes of financial sector workers and corporate executives. They claim that while incomes elsewhere have increased, it is just that those at the top of the pyramid have increased much faster.
This argument overlooks another important trend at the other end of the income spectrum. It now emerges, from the latest figures released by the BLS in the US, that changes in workers real hourly compensation has been lagging labor productivity growth. This effectively means that in relative terms, workers are getting squeezed from both side. On the one side, incomes of those at the top are exploding. On the other hand, their own incomes are not even keeping pace with productivity growth.

The graphic above, of growth of productivity and real hourly compensation in the nonfarm business sector, is striking for atleast couple of reasons. One, the gap between labor productivity and real wages of workers has been widening since the eighties. Two, even as productivity growth has been sharply rising over the past three decades, wage growth has remained small. In fact, even as productivity growth rate increased from nineties to the first decade of this millennium, the wage growth rate declined.
An excellent essay by BLS provides more interesting insights into the reasons for the widening compensation–productivity gap. This gap is a function of two trends – the growth rate of prices and the labor’s share in output. If the price deflator rises faster than the income growth, then the purchasing power falls and the compensation-productivity gap grows. The same outcome occurs if the share of the total output accounted for by workers compensation falls.
As indicated earlier, the compensation-productivity gap has widened sharply since the eighties in the manufacturing sector, in a sharp break from the trend earlier.

The consumer prices have grown much faster than implicit price deflator of manufacturing output since early eighties.

Finally, labor’s income share of manufacturing sector output has been in constant decline since the seventies. 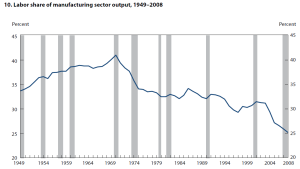 This seems to be an issue that is among those dominating the headlines.  I’m torn by it.  That’s true for a number of reasons.

First, I like discussion with out a lot of emotion driving them.  This seems to be laden with emotions on both sides.  One side sees the Wisconsin governors proposals as a last stand for America’s labor, and perhaps middle class against an onslaught to make this a harsher, more unequal, and even less free society.  The other sees the attacks on the same proposals as labor unions making an effort at maintaining an undeserved privilege at the the expense of a America’s labor broadly, and middle class.  Governor Walker is the agent of greater freedom.  Others make it clear this is non-negotiable issue one way or the other.

It has been interesting to read many posts from the perspective of one’s own lifetime relation to labor unions.  Examples are here, and here.  My own background was fairly anti-union.  My dad was a believer in cost-push inflation.  That is he blamed unions for the flation in stagflation.

Overall economics suggests unions make some workers better of and others worse off, with the losses likely larger than the gains.  Unions are a type of cartel that attempts to fix prices at an above market level, and keeps enough would be seekers of their jobs out of the market to maintain the higher wage.  Workes turned away have to find next best, but inferior alternatives.   This is consistent with findings that unions produce higher wages in unionized industries.  So I’m not convinced unions have benefits for all workers just by raising wages of their members.  (I don’t think labor unions drive inflation however.)

I am in sympathy that labor is under siege by capital and has been for some time in the US though.  Increasing mobility of labor and capital have moved much of our rust belt industry overseas and that has cost works lower skill workers at least dearly.  The displacement of middle class brands makes clear that a lot of blue collar middle class has gone away.  While free trade, and economic dynamisms have been beneficial overall, they have left a lot of casualties over the last 40 years.

Labor ought to have been focusing on issues like retraining and assistants for these casualties, and working for the interests of labor broadly.  They should serve the interests of their member and facilitate those who need to leave for other types of work.  Have they?

Overall I don’t think so.  They have focused on the interests of their shrinking numbers of private sector members and some growth in public sector unions.  As Karl Smith notes unions are very focused on their dues paying members, not former members it seems.  They also have focused on propping up failing industries, such as the Detroit big three.

But overall what other organized representative other than in a very imperfect way is there for middle class people rather than big money?  The power of big finance to wring a bailout from Washington has raised many red flags.  It doesn’t seem like unions should be crushed for all their flaws.

The Wisconsin budget may require cuts as in other states, including in worker benefits.  But that can be done with out gutting unions.  The downside is for unions pushing around elected officials to grant benefits financed by the monopoly power of the state to take income via taxes.  Can’t governor Walker stand up to unreasonable demand with out crushing the voice of the state employees?  Is he just to sensitive a sole to resist such demands?  It doesn’t seem likely.  Instead the whole things seems like an unnecessary over reaching.

I disagree with this blog often times, but this I at least mostly agree with.

Two court decisions have been rendered in recent days defending the right to free speech. The US Supreme Court today ruled in Snyder v. Phelps that there is not a private claim against the Westboro Baptist Church for protesting at military funerals. In a 7th circuit decision, the Court of Appeals ruled that a school cannot ban a t-shirt that says 'Be Happy, Not Gay' unless the shirt causes a substantial disruption. In both cases the court sided w … Read More

During your radio interview yesterday of Donald Trump, you missed several opportunities to ask probing questions – questions that would have exposed the sheer ignorance that underlies The Donald’s economic pronouncements.  For example:

– “Donald, you say that America ‘doesn’t make things any more.’  Are you unaware that, in 2009 (the latest year for which we have data), the value of U.S. manufacturing output was nearly 30 percent higher than that of China, the world’s second-ranking country in terms of manufactured output?”

– “Donald, did you know that the inflation-adjusted value of America’s manufacturing output in 2009 was 120 percent higher than it was in 1970?”

– “Donald, why do you ignore the fact that over the ten-year span 2000 through 2009, the total amount of foreign direct investment received by China was $686 billion, while the total amount of FDI received by America was 162 percent higher at $1,799 billion?  How, exactly, do you square these investments with your hysterical claims that the U.S. economy is being battered by foreign trade?”

– “Donald, you complain about America’s trade deficit.  Do you realize that another name for ‘trade deficit’ is capital-account surplus’?  Do you understand that every cent of the U.S. trade deficit is a cent of foreign savings invested in American assets – investments that increase the amount of productive capital at work in America?  Do these investments hurt Americans?”

– “Donald, you endlessly repeat that ‘no one respects America any more.’  What do you mean?  If you’re referring to our military, perhaps any decline in respect is a product of the fact that our troops and guns have too often been sent to accomplish goals that troops and guns are unfit to accomplish.  If you’re referring to the U.S. economy – while you’re right that Uncle Sam’s fiscal diarrhea certainly is a problem that must be fixed – the strength and resiliency of our economy is surely respected worldwide, else why are all of those foreigners investing their savings in America more so than in any other country?  …

via Open Letter to Rush Limbaugh.